As part of Open Journals’ initiatives, we create website for scholarly open access journals. If you are responsible for this journal and would like to know more about how to use the editorial system, please visit our website at https://ejournalplus.com or
send us an email to info@ejournalplus.com 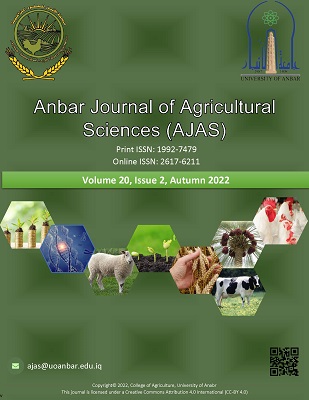 Anbar Journal of Agricultural Sciences (AJAS) is a Journal of Scientific Research on Agricultural Sciences published by the University Of Anbar - College Of Agriculture since 2005 under the license of Creative Commons Attribution 4.0 International (CC-BY). The journal publishes twice a year (June and December). AJAS aims to disseminate distinguished scientific research to various fields of agricultural sciences. We invite original work and research in various fields of agricultural sciences and related papers, reviews and short communications of content related to agriculture written in Arabic...
Read More ...

The aim of this study was to examine the effects of regular edible coating treatments on the local Pistacia vera Kaleghouchi to determine changes in composition, physicochemical parameters, and microbial analysis of the pistachio during different storage periods. Pistachio nuts were coated with chitosan at different concentrations of 1%, 1.5%, and 2%, with 50% and 60% of whey protein isolate by immersion method. Samples were stored at room temperature for 5 months. The obtained results showed that there was a significant difference (p ? 0.05) between coated and uncoated samples. The highest acid value, peroxide value, viscosity and density were observed in the control samples (1.05 mg KOH/g oil, 9.33 mEq active O2/kg oil, 142.77 cP and 0.922 g/mL) respectively, while the lowest peroxide value was found in the treated nuts with chitosan 1.5% and whey protein isolate (50%), which both were 4 mEq of active oxygen kg-1. lowest acid value (0.73 mg KOH/g oil) and viscosity (80.21 cP) was observed in the chitosan 1.5% coated samples. As the lowest density was resulted in coated pistachios with both 1% and 2% chitosan and they both were 0.916 g/mL. Chitosan significantly (p ? 0.05) reduced the mould count (Aspergillus), the highest mould count (75×101 CFU/g nuts) was noticed in control sample, while lowest (5×101 CFU/g nuts) was observed in the treated samples with 2% chitosan.

The study was designed at the Bakrajo Poultry Farm, College of Agricultural Engineering Sciences, University of Sulaimami, Iraq. The research aimed to evaluate the impact of feed withdrawal on carcass cutting and the chemical composition of the female meat of broiler chickens. Three hundred female broiler (Ross 308) randomly distributed into 4 treatment groups with 5 replicates of 15 chicks each. The treatment groups included control T1 with no removal of feed and T2, T3, and T4 with, 6hr, 9hr. and 12 hrs. per 24hr. removal of feed respectively. Two females were randomly selected from each replication based on body weight, weighed alive and sacrificed to estimate the percentage of weight for carcass cuts. The results showed that the percentage of dressings increased in the amount of feed withdrawal in T2, also the abdominal fat was an improvement in T2, with substantial improvement (p>0.05) for breast percentage in T2 as well. However, no major differences were found in the thigh and drumstick percentage of female broiler chicken. The effect of treatments was not significant differences on viscera oranges. Overall, withdrawal of feed for 6hr lead to increase dressing and breast percentage also by these methods can decrease abdominal fat pad and declining feed costs of female’s broilers.

The study was carried out by using local organic wastes to investigates the growth of mycelium Ganoderma lucidum Mushroom, produce the spawn and prepare a substrate and their effect on the duration and Production efficiency. The experimental results of mycelium growth on a different set of local organic waste show that the minimum growth-period was 13.34 days with the substrate B, such that the mycelium was diffused on the substrate in cottony compact. On the other hand, the mycelium growth continues to 21.34 and 21.67 days with the substrate D and C, respectively, with a significant negative variation (P>0.05) and cottony non compact mycelia growth on the substrate parts. The source of the produced spawn was adopted for mycelium growth results. The results of the substrates characteristics during the stages of substrates preparation have been demonstrated that the highest value of pH was achieved by 6.93 with the substrate A. Moreover, the results show that the maximum moisture content of the substrates was obtained with the substrate B about 67.36%, and that the minimum time period for duration of the crop by two time harvested Done during 107.16 days and 107.33 days on substrates B and E respectively. While The difference was significant (P>0.05) with substrates C and D The second harvest ended after 108.66 days and 108.83 days from substrates Spawning respectively. It was not recorded significant with different source spawn. The best bio-efficiency has been achieved an average of 6.55 % with substrate B. the average substrates efficiency that spawned it by spawn- which its source is the Barley grains achieved 3.88 % Significantly superior (P>0.05) on substrates efficiency that spawned it by spawn- which its source is the Palm trunk sawdust.

A field study was carried out in clay loam soil that classified into Typic Torrifluret in Ramadi city (College of Agriculture- University Of Anbar) during the fall season of 2018 in order to compare mobile drip irrigation with under surface drip irrigation by using Nano-Root guard drippers and their effects in physical properties and water consumption of bean as well as, the study targeted determination of water use efficiency using Najeeb Kharoofa equation depending on crop coefficient that obtained from recent researches and weather data of experiment location. All agricultural practices were done as recommended and the experiment was laid out as RCBD with three replications of each irrigation system. Seeds of bean (cv. Veto) were sown in 20th of October 2018 and the harvest time was in 13th of March 2019. Irrigation dates were at 50% depletion of available water according to evaporation pan Bean productivity was significantly increased at under surface drip irrigation with 7.71-ton ha-1 in comparison with 6.32-ton ha-1 that obtained from mobile drip irrigation. The difference were significant between water use consumption values that were calculated according to Najeeb Kharoofah equation and between data collected from evaporation pan, however it was 148.48 mm by Najeeb Kharoofah equation while it was 446 mm according to evaporation pan data. Regarding the method of irrigation, they were affected. The effect was clear in the mobile drip irrigation compared to sub-surface drip irrigation as the evaporation rate was higher. However, the average of soil water content average for the three replications along growing season was 21.75% while it was 24.96% in the sub-surface drip irrigation.

A field experiment was conducted for the autumn season 2018 to evaluate the effectiveness of Super Absorbent Polymer (SAP) and Ceratophyllum powder and there effect on the sandy water parameters of sandy loam and water consumption of maize,where the coefficients containing different weight concentrations were distributed from SAP (0.4%, 0.2% and 4%) of Ceratophyllum powder, and irrigation at three levels (in the net irrigation requirement,125% of the net irrigation requirement, 150% of the net irrigation requirement) and the most important results were obtained: The water consumption of I1 (526) mm, while the amount of water added (502) mm and a decrease of 4.56% This reduced the role of both SAP and Ceratophyllum powder in increasing soil water retention capacity and improving its physical properties. The highest water consumption (ETc) of I3 was 789 mm. season-1 and decreased to 658 and 526 mm at I2 and I1 irrigation coefficients respectively, due to differences in the amount of water added and prepared in soil. There was a decrease in saturated water conductivity values with an increase in the level of addition of SAP and Ceratophyllum powder. The highest value of saturated water was 0.16 cm.min-1 for the treatment of I1O1, while the value of water delivery was less than 0.4% of SAP powder. Cm min-1 for the I3P2 transaction. The base infiltration values decreased with the addition of the addition of SAP and the Ceratophyllum powder, with the highest value of the basal treatment rate of 8.4 cm min-1 for the treatment of I1O1, while the base tip value was added by adding 0.4% of the SAP powder to the treatment I3P2 1.2 cm min-1.

EFFECT OF PLOWING AND IRRIGATION SCHEDULING ON SEASONAL WATER CONSUMPTION, YIELD AND ROOT DISTRIBUTION OF MUNG BEAN UNDER SURFACE AND DRIP IRRIGATION

A field experiment was conducted in the (Juwaba) Arund area of Ramadi city in the spring and autumn seasons 2017. To study the effect of intercropping systems and maize varieties on the yield and its components and the quality characters of maize crop, maize varieties (booth 106, 5018, 5012 and French cultivar) were used. The experiment was carried out according to the design of (RCBD) and in the order of the split plot, cultivar wear arranged in Maine poke the main plots and the secondary plots occupies (the intercropping systems). The results showed that the intercropping system 1: 2 was superior in number of ears per plant which gave 1.48 and 1.70 ear in the spring and autumn seasons respectively, also it was superior in the average of 500 grains weight in the spring season by giving 155.4 gm, also the same system in the grain yield in the autumn season by giving 10.96-ton ha-1. While the cultivars, The French cultivar was superior in spring season in seed yield which gave the highest value 7.99 ton ha-1, while the cultivar 5018 was superior in the autumn season by giving the highest grain yield was 11.48 ton ha-1, while the qualitative characters, sole crop for maize was excellence in the percentage of oil on the rest of the farming systems in the autumn season only gave higher mean about 4.74% ,while the intercropping system 1:2 exceeded the in percentage of protein in seeds about 10.32% in spring and autumn seasons.

This study was carried out in the laboratories of the Department of Food Sciences in the Colleges of Agriculture / University of Tikrit and the College of Agriculture / Anbar University for the period from 9/10/2018 to 1/5/2019 with the aim of extracting the anthocyanins pigments from the peels of two varieties of eggplant (Solanum melogena L), namely. Hytech and Hauser, which were grown in Yusufiya / Baghdad. Several solvents were used in the extraction of anthocyanins from the two types above, including (acidified ethanol, tartaric, malic and citric) in order to determine the best variety and the optimal conditions for extraction, and the results showed that the highest proportion of anthocyanins obtained was from the Hitech variety with a value of 89.35 mg / 100 gm compared to the variety. Hauser, as the proportion of anthocyanins obtained was 67.12 mg / 100 g, using acidified ethanol as the best solvent for the extraction compared with other solvents used. The results of the optimum extraction conditions also indicated that the best extraction temperature used was 40 ° C, the best time was 75 minutes, and the best mixing ratio was 1: 10.

A number of dried fruits included figs, Qamar al-Din slices (dried apricots), tamarind paste, carrot slices, coconut slices, and lemon slices; were used to determine microbial counts (Total aerobic bacteria, total Coliform, E. coli, Staphylococcus aureus and yeasts and molds) via petrifilm method. A number of essential elements (Fe, Zn and Mn) and toxic elements (Ni, Cd and Pb) were estimated. A significant differences P <0.05 were recorded for the microbial counts among some fruits. On the other hand, no significant differences were observed P <0.05 among other samples. The highest mean of TC was recorded 4.3 cfu/ g in Qamar al-Din slices. No growth was recorded for Staphylococcus aureus for all dried fruit samples. For yeasts and molds, the highest mean logarithm was registered 3 cfu/ g in Qamar al-Din sample, while the lowest mean was recorded 2.3 cfu/ g for lemon slices. A significant differences were observed in elements mean concentrations P <0.05 among some dried fruits, while no significant differences were observed among other samples. For the essential elements, Fe recorded the highest mean concentration in figs; 5.44 ?g/ g. On the other hand, Pb, the toxic element, recorded the highest mean concentration 0.62 ?g/ g in carrot slices. From the obtained results, it was concluded that the concentrations of essential and toxic elements in the studied fruits were found within the acceptable range or less than the permissible limits set by the various health organizations concerned with food safety.